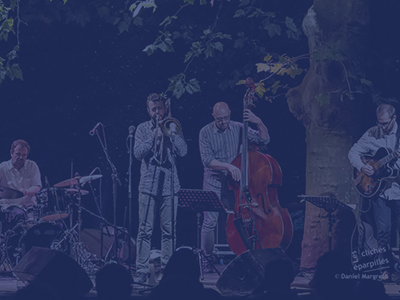 Trombonist of the last group of Claude Nougaro and the Maraboutik Band of Manu Dibango, founder of the group DPZ with Thomas De Pourquery, winner of the first prize (as a soloist) at the Competition of the Defense in 2002, guest soloist of the Gnawa Festival of Essaouira in 2010, Daniel Zimmermann was in 2014 the first trombonist nominated for the Victoires du Jazz, for his album “Bone Machine”.  Other projects of Zimmerman, as a composer or leader, include his trio with guitarist Manu Codjia and accordionist Vincent Peirani, free-psychedelic fusion duo Spice’Bones, and the younger funk-rock Band Duckbill. He has recorded albums and film music with countless artists and he regularly performs in France and abroad with various artists. Daniel Zimmermann is a spontaneous soloist, his style is characterized by a very clear sound, a flexible and agile phrasing, an interweaving of funk, pop and New Orleans influences.